Fashion Brands You Need To Know

Giorgio Armani was actually born in Piacenza, but (as he declared in the 1990 documentary Made in Milan) Milan is the city where he truly felt himself. He moved to Milan at a young age, doing all sorts of fashion-related jobs before launching his eponymous brand in 1975. The label rose to prominence with its line of deconstructed suits that challenged traditional tailoring: the Armani jacket became both a staple for style-conscious men and the go-to garment for the new generation of working women seeking a more powerful image after the feminist revolution of the 1960s. Armani is much loved and respected by the Milanese, who fondly call him King George. Every fashion week, as well as showcasing his own collections, he offers his venue – the prestigious Armani Teatro – free of charge to a young designer of his choice.

The Attico (Italian for penthouse) is the brainchild of street-style icons Gilda Ambrosio and Giorgia Tordini, born out of a shared love for glamour and sparkle. In 2016, the two it-girls were both studying fashion (one at IED Istituto Europeo di Design and one at Istituto Marangoni) when they decided to launch their own brand. The label soon became a favourite of both seasoned fashion editors and cool party girls, stocked on Net-a-Porter and in international concept stores. By using luxurious, richly patterned silks and elaborate embroidery, the brand infuses opulence into the urban wardrobe. Signature items include ultra-feminine mini-dresses, sparkling ’80s-inspired blazers, tank tops and sensual silky loungewear. 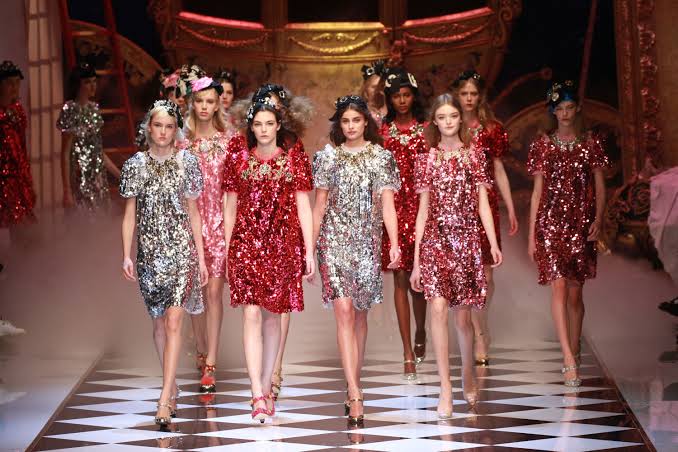 Sicilian Domenico Dolce and Milanese Stefano Gabbana debuted as a designer-duo (and as a couple) at Milan Fashion Week in 1985 with a striking ‘Sicilian widow’ collection. Over the years, they’ve displayed collections that channel different narratives and characters of the Mediterranean: slick pinstripe suits, bombastic Baroque evening wear, gauche Neapolitan streetwear or romantic fairytale gowns. Today no longer a couple, they still mesmerise the crowd as business partners. Brocade, floral embroideries, lace, animalier prints and all things decadent are among the brand’s signature elements. Their ad campaigns are usually crowded shots of Sicilian lifestyle scenes, often featuring the brand’s all-time muse Monica Bellucci. Despite being one of Italy’s most well-known brands, Dolce & Gabbana isn’t registered to the Italian Chamber of Fashion and carries out its promotional activities as an independent. For this reason, their show doesn’t appear on official Fashion Week calendars.

Moschino was launched in 1983, embodying the ’80s love for all things eccentric and over the top. Franco Moschino was an artist and an intellectual; before his untimely death in 1994, he led his brand with a punk attitude and satirical wit. His eccentric designs often satirised the fashion establishment and its victims: garbage-bag dresses, ‘waist of money’ belts stitched onto Chanel-like suits, hats shaped like light-bulbs, beautifully cut jackets with a giant pair of eyes on the back, and a very heavy use of prints and logos were all part of Moschino’s radical vision and pop aesthetic. The brand’s creative director is now Jeremy Scott, who has perpetuated Franco Moschino’s spirit, gaining the reputation of “most irreverent designer” and “fashion’s last rebel”. From Barbie dolls to The Wizard of Oz, his collections are still inspired by pop elements, often carrying bold political statements.